No, not an African divorce drama, rather a tale of two designs with the same name... 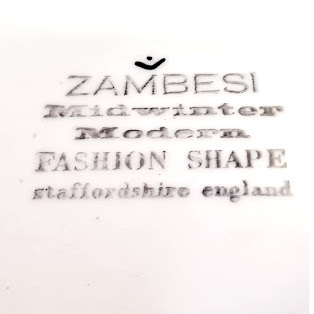 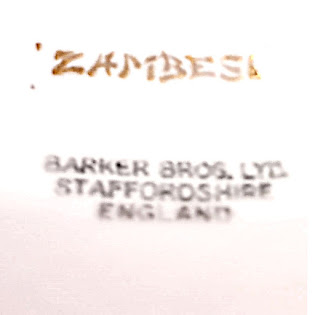 Jessie Tait worked for Midwinter pottery from 1946 into the 70's but perhaps her most productive and influential period came in the 1950's when, taking advantage of Midwinters bold new Stylecraft and Fashion shapes, she designed several patterns now regarded as iconic.   (further reading on this excellent site...Midwinter Pottery)

Among these was 'Zambesi' a zebra stripe black and white pattern with red detailing. The name and pattern no doubt influenced by the 1950's American inspired craze for all things central African.  There were several songs called Zambesi around this time and I'm sure there was a major Hollywood film called Zambesi or Zambezi out but there's no trace of it online so maybe I'm imagining that! 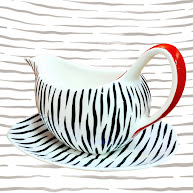 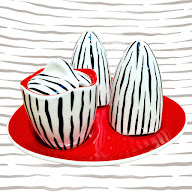 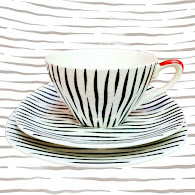 Another UK firm producing good plateware at the time was Barker Bros.  They also had a range called Zambesi, which confused me when first dipping a toe into the 50's design world. I suspect their design came a little later than Midwinters,  which seems a little cynical as it's unlikely they were unaware of Midwinters range (but bear in mind their Fiesta range which bears more than a passing nod to the Homemaker design and was produced a few years after it).  Barker Bros Zambezi has a black and yellow African style border decoration.  Attractive but not as much of a statement as the Midwinter. 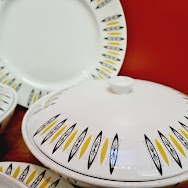 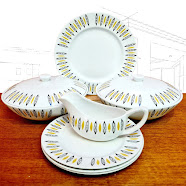 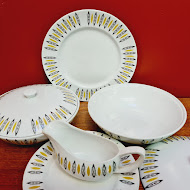 The Barker Bros nowadays isn't as collectable as the Midwinter, despite being rarer, but it's a nice design, perhaps overshadowed by the name duplication?
We usually have some examples of one or both in stock, search Space Vintage and Retro
Posted by Steve Space at 09:21

We're always interested in buying new stock, if you have something special which you think we may like, give us a call on 01423 709941